Leave Harare on the Golden Stairs Road (A11) driving towards Mazowe.  Distances are from Mazowe Dam wall, 3.1 KM turn left onto the A12 (at the Tengenenge sign and keep following them through Mvurwi) 15.70 KM ignore right turnoff to Amandas (formerly Concession) and continue on the A12, 49.6 KM ignore right turnoff to Msonedi, 57.4 KM turn left for Mvurwi, 63.7 KM (in Mvurwi) turn left at T junction, 64.7 KM turn right onto a tar road, 89.7 KM reach turnoff on right for Chiconyora Farm. Please call in at the farm office and speak to Andrew or Langton and ask for permission first. Zombepata is on the northern side of the prominent granite mountain. The cave is 30 metres below the summit, facing north and reached by a fairly strenuous climb over bare granite from the base on the north side. 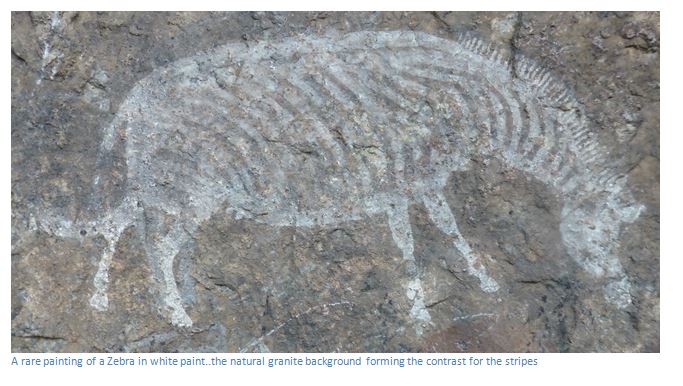 Amongst the more conventional paintings of animals at Zombepata are numerous images of zebra, including one lying down with its legs folded on the body, which have been particularly well drawn. Also sable antelope painted in yellow ochre with a white outline, baboons in white and more unusually, four white porcupines. 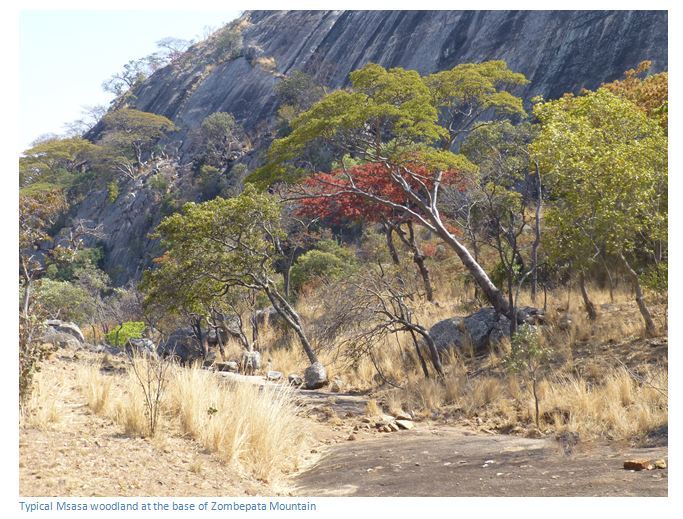 This site north of Harare has well preserved paintings, unusually for Mashonaland many are in white or pink colours. On the left side of the frieze are outlined five red circles filled with white flecks, four circles have spikes around their edges and from one circle the flecks spill out in the manner illustrated below.

The centre of the cave contains another two circles and on the right are four more complex variations of this design that are often called ovoids or formlings. Their interiors contain a series of ochre ovoids, covered in lines of white dots, and they are capped or surrounded in white paint. Instead of flecks they have small white arrowhead shapes filling the circle and escaping from a small opening in it. In the past they were seen as representing beehives, the flecks and white arrowheads as the bees and this explanation gains some significance, as the San hunter-gatherers, the original artists, believe bees and honey were particularly potent. Other authorities interpreted them as swallows, bee-eaters or sand martins.

Elizabeth Goodall, who reproduced the painting below, believed the round forms were associated with clouds and rain and that Zombepata cave may have been devoted to rain ceremonies. This may well be true during the Iron Age period, but the rock art here at Zombepata belongs to the Late Stone Age, as the large quantities of discarded quartz and chalcedony shards on the floor of the shelter bear witness. 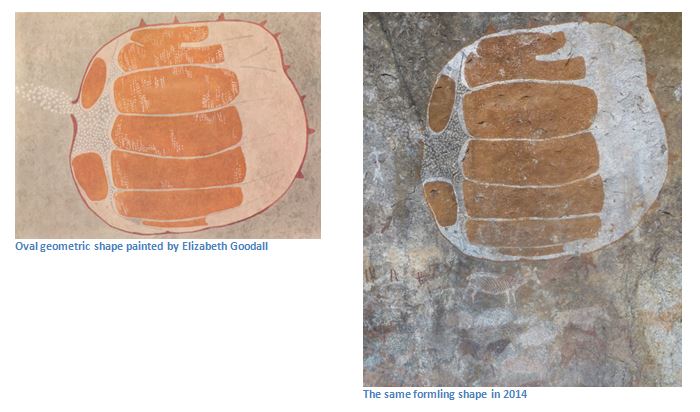 To Western eyes these abstract designs, which are quite common in the rock art of Zimbabwe, are difficult to interpret, hence the range of explanations that have been given.  Their basic shape is simple, based on clusters of oval or round shapes often capped in white. However, within the context of San hunter-gatherer beliefs, they would far more likely appear to be a portrayal of personal supernatural power experienced by trancers. The San refer to this as n/um and they believe it resides in their stomachs and becomes activated by hours of intense sessions of singing and dancing from where they progress into a trance state. The n/um releases a tingling sensation, like prickly thorns or stings and then overflows and leaves the body, at which stage the trancers may go rigid, or collapse and may need support from  fellow dancers. In the trance state, they enter their spirit world. The paintings were to portray to non-trancers within San Society the sights and sound encountered in their spirit world. 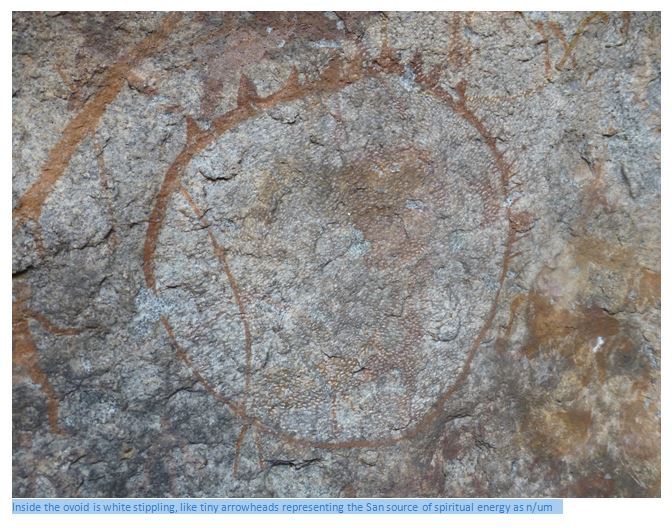 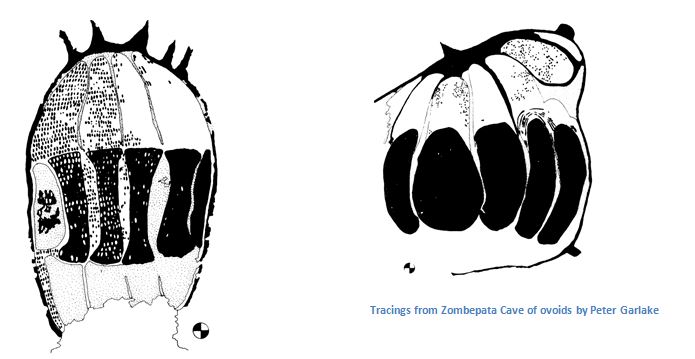 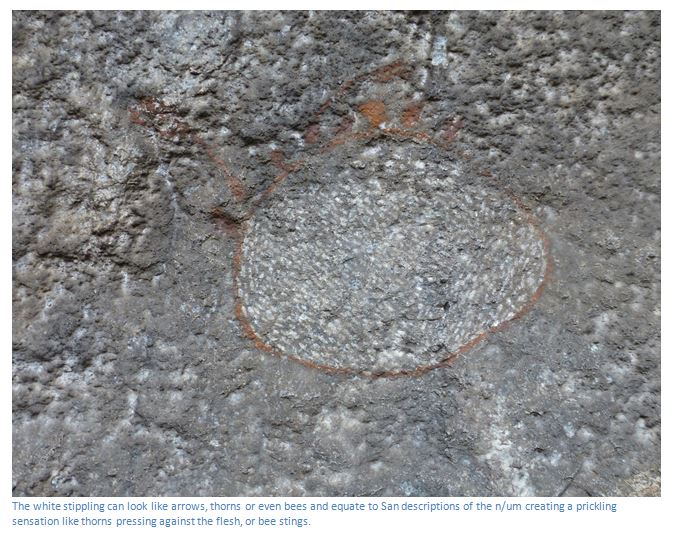 Within this context, the red large circles have been interpreted as the stomach, the red enclosed ovals as the liver or spleen. The spikes on the outside represent the tingling sensation felt by trancers, the stippling represents the activated n/um which then overflows and leaves the body. 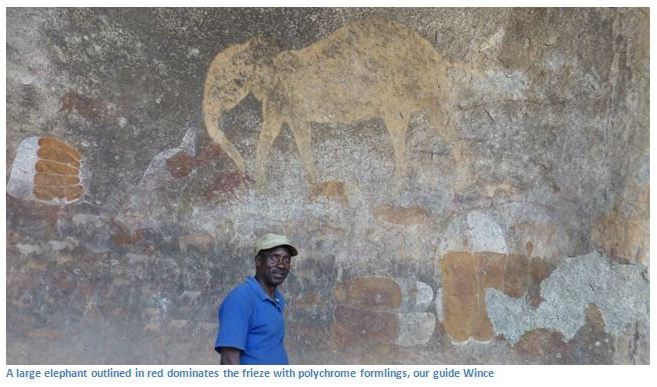 Zombepata was excavated in 1968 by Cran Cooke who found Middle Stone Age remains from approximately 42,000 years age and from 22,000 to 14,000 years ago: Late Stone Age artefacts are from 2,000 years ago. Although recent questions have been raised about Cooke’s sequencing of the artefacts, Zombepata has unquestionably been inhabited by humans for a long time. 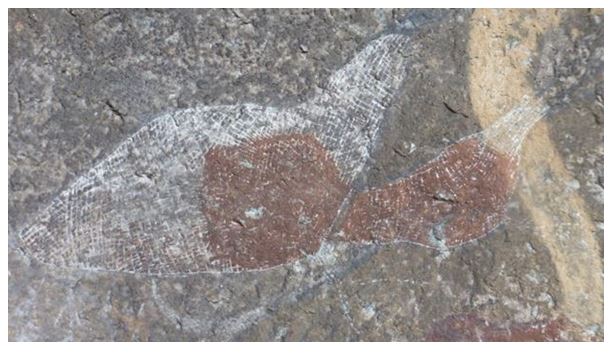 This shape with the brown core and cross-hatched in fine white lines to the left of the elephant’s trunk is unique in Zimbabwe rock art and maybe another variation of the ovoids or formlings in this shelter. More recently Siyakha Mguni has reinterpreted these shapes as representing the complex architecture of ant-hills. 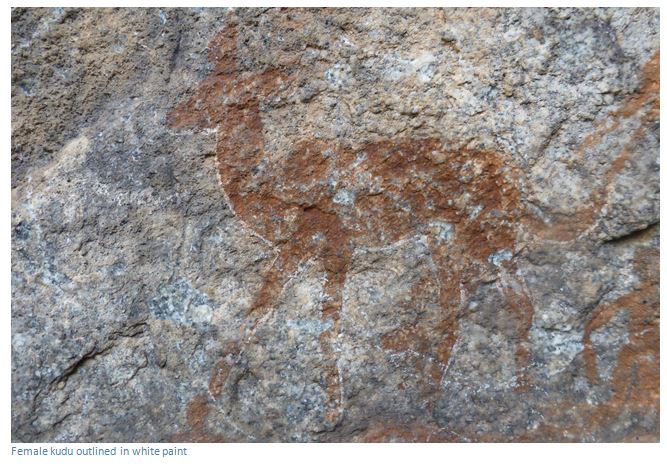 When to visit:
Open Monday to Sunday, but enquire at Chikonyora Farm first for permission to visit
Fee:
None, but a donation would be gratefully received
Category:
Scenic
Rock Art
Province:
Mashonaland Central