The earliest mail service was by runner through Bechuanaland (modern-day Botswana) between Mafeking and Bulawayo. This account is by J.E. Symons:  “The mail for Tati and Gubuluwayo (Lobengula’s Kraal, Matabeleland) leaves here on Mondays at 3 p.m. It is carried by native runners, who do not boast of much raiment; one carries the bag for Tati, and another the Bulawayo bag. They arrange the mail bag on the one end of a stick, and on the other end they fasten their blanket, sandals, “tin billy” for cooking a piece of meat (sometimes), and some mealie-meal tied in a piece of cloth; the stick is put on the shoulder, they bid me “Dumela” (good day), and the mail leaves. Tati is about 120 miles from here, and they do the journey in from 3 to 4 days. Other runners are engaged from Tati to Bulawayo, which is about 120 miles further.”

The reason for the mail going through Botswana was clearly a political wish to avoid the alternative (and shorter) mail route via Pretoria and the Zuid-Afrikaanse Republiek (Transvaal). 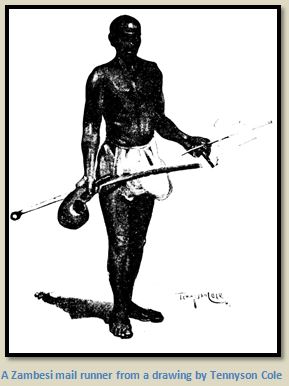 The same year, Charles Helm organised the first postal service for the traders, hunters and missionaries in Matabeleland. “Runners” went fortnightly to Tati to hand over the mail to other runners and to bring back any mail for Bulawayo.  There was an annual charge of between £1.10.0 and £2.10, or 5/- a letter and the service was a great benefit to all those residing in Matabeleland. The Jesuit Fathers at the Old Jesuit Mission; Croonenberghs, Depelchin and Law would visit the Helms just ten kilometres away quite frequently for the hospitality provided by the Helm’s, the chance of good conversation company and to collect their mail.

In 1889, the British South Africa Company prepared for the occupation of Mashonaland. The arrival of the 1000-man pioneer column and police force led to the establishment of a significant settlement which served as a training ground, supply, and communication centre, called Fort Macloutsie, near the Maklautsi (Motloutse) River in Botswana, at present day Bobonong.

In late 1892, the mail contract between Mafeking and Macloutsie passed on to the Wirsing Brothers of Vryburg, but soon after the Zeederberg Brothers accepted the Macloutsie-Tuli section in addition to their already operating Transvaal-Tuli service.

As the route from Mafeking to Macloutsie was about 440 miles long, fresh mules or oxen were in-spanned at 30 relay post stations with intervals of 10-20 miles. Since an average of 10 mules or oxen was used to draw the coach / cart, a minimum of 300 animals were required at all times. Because of disease, horses were used to draw the coach until Mafeking, mules between Mafeking and Palla Camp, and then oxen hauled the mail cart beyond Palla Camp.

The considerable difficulties encountered in transporting the mail are illustrated in a 1891 letter from the Postmaster-General of British Bechuanaland: “The service from Mafeking through the Protectorate to Macloutsie is however subject to considerable delay at times owing to the difficulties to be encountered during one portion of the year, these consist of scarcity of water and horse-sickness, and other times swollen rivers and heavy roads. The mail contractors lost over 350 horses and mules from horse sickness alone in four month last year. This will give you some idea of the difficulty in maintaining a punctual service.”

Mail services further north along the pioneer route were provided by dispatch riders until more permanent arrangements were made.

In contrast to the postal services that appear to have been developed as need materialized, the Telegraph service had Cecil Rhodes’ and the British South Africa Company’s highest priority from the very beginning. The line north from Mafeking was started in May 1890 prior to the departure of the Pioneer Column and reached Palapye in October with the extension to Macloutsie was completed in May 1891. The telegraph line passed through Tuli and reached Salisbury in February 1892. The construction of the 820 mile long line, at a total cost to the British South Africa Company of £70,000, allowed telegrams to be sent, for example, from London to Salisbury for 9 shillings 2 pence per word. As a result of the 1894 Matabeleland campaign, the main telegraph line through Bechuanaland was extended from Palapye to Bulawayo via Tati and Mangwe, with another line from Macloutsie to Mangwe.

The railway reached Vryburg in December 1890; then in October 1894, the line between Vryburg and Mafeking was officially opened and in 1897, Bulawayo was finally reached. Later the telegraph line was relocated along the rail line and in 1917 / 18 the telegraph office at Macloutsie was closed.

When to visit:
Not applicable
Fee:
None
Category:
Historic
Province:
Bulawayo